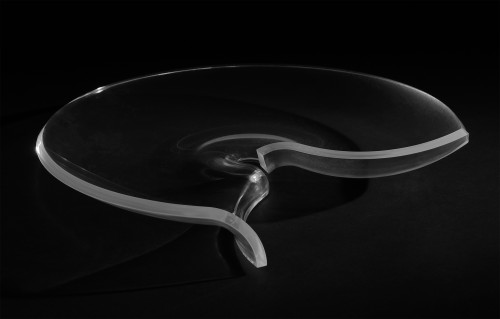 Seeing Through Contemporary Craft: The Application of CNC Milling to Cast Acrylic form.

The advent of computer aided manufacture methodologies has provided makers with additional tools sets with which to fashion objects. From early pioneer work by digital sculptors such as Duca (1965), Csuri (1968) and Fujihata (1968) to the quotidian use of such technologies in flexible specialist contexts (Piore and Sable, 1984) such as automotive, aerospace, general engineering and architecture . Whilst CAD/CAM was initially highly specialised, advances in solid modelling and more recently web based software along with price reductions in hardware and new Additive Layer Manufacture (ALM) technologies (since 1985) have led to an exponential increase in the use of such technologies amongst creative practitioners. Recent exhibitions featuring such work have proliferated.

Along with the formal possibilities such technologies afford at levels of precision hitherto hard to achieve in an economically viable timeframe, less common materials such as cast acrylic have become materials now readily accessible to the digital craftsperson.

This submission proposes to report on the work of the author who has exploited this capability using CNC milling methodologies.

One question that arises from your project: In the field of Drama and Performance a central concern is the notion of ‘liveness’; to what extent is this analogous to the role of the hand in craft?