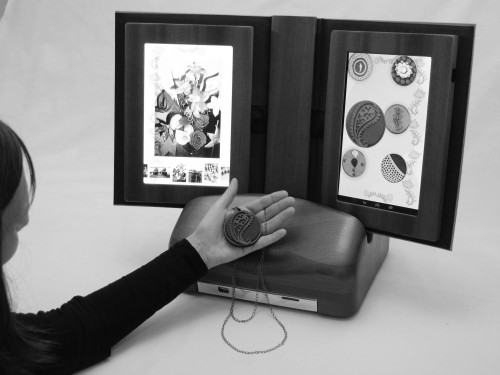 Parshiya is an ancient word that means to participate in a group, family, community, or collective. The photo-parshiya is an enhanced object, a digital photo-album designed to support the sharing of cultural heritage, designed with staff and learners at the Angelou Centre, an international women’s centre in the North East of England.

The photo-parshiya can be held like a book and is portable or can be docked as a double touch screen tablet display on a bespoke crafted wooden base. The artefact has been developed through interdisciplinary collaborative practice involving an artist ethnographer, interaction designer, programmer, engineer and furniture designers in response to long-term digital creative media and DIY craft workshops with learners and staff. Women who come to the Centre have made individually designed necklaces enabling reflection and discussion on aspects of identity and cultural heritage. The necklaces are networked with the tablet displays to create personalized photo-collections and have been used to accompany workshops exploring cultural heritage, transnational migration and trade.

In using the photo-parshiya in workshops, many women have described how this has supported greater feelings of pride, confidence and curiosity in working with digital technology to curate and share photographs of fulfilling life experiences and achievements. This has further enabled the building of new relationships with friends while supporting existing intergenerational family negotiations around technology use in the home. The process of making and using the artefact has further demonstrated the value of sensory connections in making digitally enhanced objects part of culturally and personally meaningful experiences (Ciolfi 2012), including supporting intimate connection (Wallace 2012, 2013), exploration and play within familial and culturally diverse institutional settings.

One question that arises from your project: How can the integration of social, material and technical systems better support everyday curation and selection of meaningful digital content?

How can digital material artefacts be better integrated into the everyday practices of care and cultural institutions?