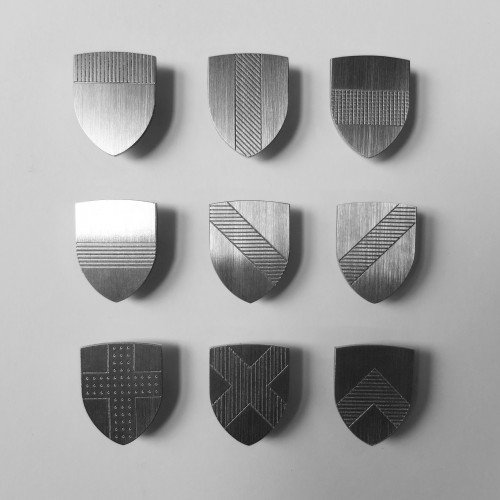 In the context of increasing access to digitally controlled engraving machines (both laser and rotary cutting machines), we consider how the body of knowledge developed throughout the long history of engraving can be supported in vector graphics software.

The Petra Sancta system for translating the colours of heraldry into specific hatching patterns was developed in the 1630s and is still observed in heraldic engraving today. It offers a collection of 9 patterns, developed to provide an attractive and legible contrast with one another (Brittain et al., 1958, p.32). We present a piece of software developed by the authors, the Petra Sancta Adobe Illustrator plug-in, which can be used to generate these hatching patterns and output vector format files that are widely compatible with digitally controlled engraving hardware.

The Petra Sancta plug-in is an effort to support the shared principles and rules of a traditional craft in digital software. Drawing on the work of anthropologist François Sigaut, who observes that ‘the entire history of technics might be interpreted as a constantly renewed attempt to build skills into machines by means of algorithms, an attempt constantly failed because other skills always tend to develop around the new machines’ (Sigaut, 1994, p.446), we see no need to lament the loss of hand skill associated with new digital engraving techniques. Trades such as engraving have always used novel tools and techniques to improve the precision and efficiency of their work, developing new skills alongside the old.

As the manual dexterity of a craft is built into digitally controlled hardware, however, we are concerned with supporting the associated body of knowledge that forms the ‘substance of a craft’s connoisseurship’ (Dormer, 1994, p.44). The Petra Sancta script is an effort to provide a more nuanced and sophisticated alternative to the solid fills of laser engraving or rotary cutting software.

A question that arises from your project: If, as the title of this conference suggests, increasing access to digitally controlled manufacturing techniques, makes us all ‘makers’ now, it follows that, more specifically, when incising acrylic, metal or wood, we are also all engravers. In this context, we are concerned with how the connoisseurship of engraving can be supported through software development. If we are all engravers, how can we be good ones?