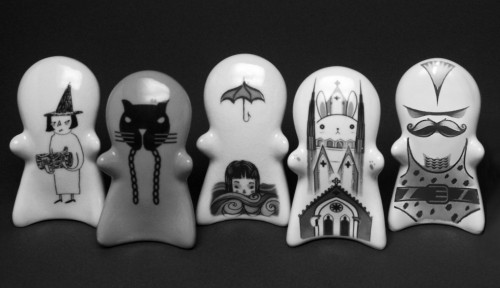 DARWIN / The Designer Toy Platform as a Means of Academic Inquiry

Collaboratively designed by students and the faculty of Illustration program at Emily Carr University, the Darwin project employs industrial ceramic processes but adopts the aesthetics and collaborative dynamics of the explosive “Urban Vinyl” subculture. As a generic figurative form that lacks detail and invites transformation through surface design, Darwin appropriates the strategy of the designer toy “platform”, popularised by Toy2R’s Qee and KidRobot’s Dunny.

The project involves glazed ceramic “blanks” that are produced as identical multiples that are then offered to collaborators, each of whom provide a unique surface pattern to create a customised version of the product. Like his namesake, Darwin is all about adaptation, and offers an ideal opportunity for collaborative experimentation. Regardless of the creator’s experience with ceramic media, any digitised image can be applied and kiln-fired onto the form with specialised ceramic decals.

Unlike the vinyl toys that inspired them, the Darwin figures are conceived and presented primarily as a form of academic inquiry – an invitation to investigate our adaptive and/or conditional nature. The Darwin project aims to investigate how the collective and potentially disparate concerns of a community might be manifested symbolically or allegorically. This research project explores the ability of a collection of objects to communicate through their interrelation; a collection that does not strive for fixed meaning, but rather aims to act as a multiplicity of ciphers through which we might continuously revisit the complexities of a given question.

The project advocates the ethics of localised production of Designer Toys, rather than their importation from overseas factories, and it democratises the design of the objects through broad collaboration, while limiting the scale of production to demand. Though the project employs a formal vocabulary derived from plastics and animation, a much older lineage of allegorical figuration is evoked by its translation into ceramic material.

Steinberg, M., 2010 “A Vinyl Platform for Dissent: Designer Toys and Character Merchandising” in The Journal of Visual Culture August Vol. 9

A question that arises from your project: Emily Carr University’s new Centre for Applied Art and Material Production (CAAMP) is an initiative dedicated to the question of integrating cultural inquiry with the production of objects of mass appeal. The DARWIN project seeks to investigate this possibility.