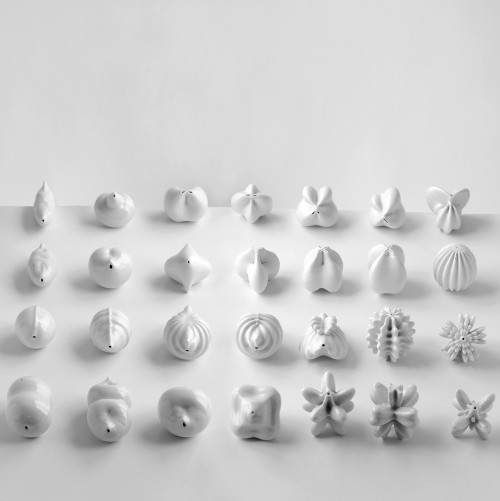 There is a long tradition of people who ‘make’, also making their own tools. While making has moved into the digital age, with all the advantages and new ways of working on offer, ultimately we must not forget that that it is just the continuum of a long established tradition: materials, process and the human desire to express ourselves through what we make remains. Being fascinated by how computer code can be used to mimic natural codes, patterns and processes I have developed a working process whereby the shapes of my pots are written and generated in computer code. This digital information is then printed directly in clay with a studio based DIY 3D printer. Credit goes to Belgium design duo UNFOLD who first refined the ceramic extrusion 3D printing technique. I have picked up on that development and because of the lack of a readily available 3D printer to convert to printing with clay I have designed and documented a self-build ceramic 3D printer of my own. This is the hard tool, that by sharing on the Internet, it is hoped the open source community will continue to develop further. It is important to emphasise that the tool building was not driven by an interest in the technology but by what the technology could offer creatively – the tools are a means to an end and not the end in themselves. The soft tools are best thought of as small apps or software that when run generate a visualisation of the 3D form that can be saved as a computer file, ready to be further processed and printed. The software tools are written in a simplified form of java code using Processing, a programming language developed for artists and designers. I tend to work in series or groups based around a certain algorithmic idea, mathematical function or digital possibilities such as texturing the surface of my pots with audio input.

One question that arises from your project: Can the strong horizontal linear texture of the 3D printing process that creates a self similar aesthetics be avoided.