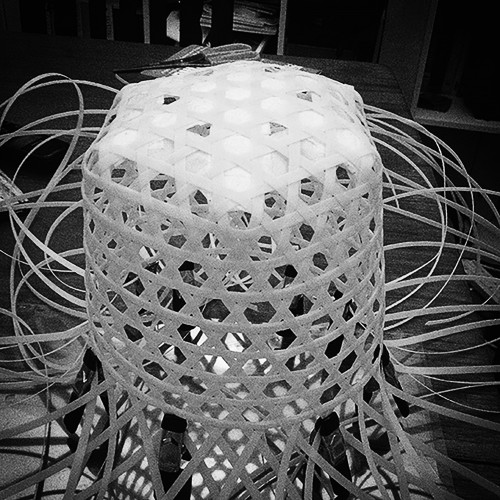 I see patterns when I understand things. I see the world as visual patterns of connectivity. I think pattern recognition is a fundamental part of the creative mind… I see everything as patterns. – Richard Saul Wurman (Architect and Information Architect)

I am currently applying to undertake a practice-led PhD exploring the role of Japanese bamboo basketry as an informative miniature for digital design, manifesting nature and the value of hand-hewn craft. As a precursor to this work I am considering the pattern relationships between traditional basketry and digital design. At present, I am examining and documenting a basket from the British Museum collection in order to create a hybrid-craft prototype, via 3d modelling software and digital printing technology. I will present this project at All Makers Now under the theme Enhancing the Object, in order to: highlight interdisciplinary collaborative practices that have enabled successful outcomes; and develop a digitally enhanced object in the context of a museum.

Late last year I visited the Te Papa Museum, Wellington, New Zealand where I researched and documented pieces from their basketry collection. Staff at Te Papa are engaged in a major project focussed on digitising their collection using 3D scanning equipment. Seeing this process led me to consider a simple work of my own, based on using artefacts to inform digital design. In completing my prototype I am also reviewing Amit Zoran’s Hybrid Basketry project (MIT Media Lab) as a source of technical inspiration. The digital age has created a paradigm shift in design, often resulting in the generation of unmotivated forms (Agkathidis, Aitchison). As such, my proposal is an experimental initiative aimed at linking craft making and digital design technologies in order to suggest new form defining strategies.

Aitchison, J 2011, Craft Thinking and Digital Making: The role of the architect in the digital age cited 07 January 2014, www.frrarchitects.co.uk/wp-content/uploads/2011/07/craft-thinking-digital-making_Joanne-Aitchison.pdf