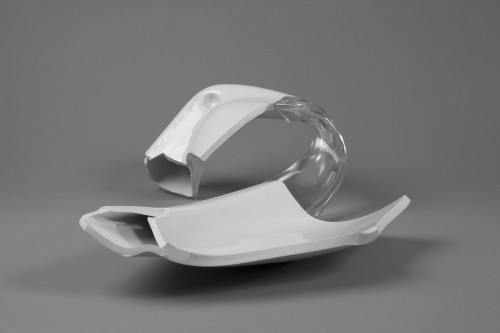 Should craft practitioners still predominantly make ‘beautiful physical objects through the skilled use of tools’1. Jorunn Veiteberg discusses in her book, Craft in Transition that in the world of fine art the notion of beauty has become a taboo subject, translated as an empty aesthetic, commercial, feminine and inconstant. For these reasons, it has become undervalued in this arena, and is being questioned by an increasing number of glass practitioners (myself included). The recent formation of the Seccessionist glass movement is making some inroads in this debate. Rather than ‘beautiful’, my desire is to make awkward objects with flaws and disparities that highlight a willful amateurism. The inherent qualities of broken glass being both fragile and dangerous, as opposed to shiny and translucent, form part of my visual vocabulary.

My conventional artistic practice is deliberately low tech in construction, responding to broken ceramic found objects in the form of sanitary ware. Assembling cast and sheet glass to extend and redefine the ceramics to reference anatomical structures to create precarious and tactile compositions.

I also collaborate with Tavs Jorgensen, Research Fellow at Falmouth University, in the investigation of Rapid Tooling (RT) 3D printed mould making for glass casting, alongside the digitization of ceramic edges using a 3D scanner. My intention is to connect ceramic objects in new configurations using cast glass as a conduit. By repositioning ceramic fragments on a grid base, the edges can be orientated using a digitizing arm. This data is then aligned with the scanned data enabling the production of a CAD model and RT mould.

‘Anatomical Deconstruction’ series addresses issues of aesthetic choices and material juxtapositions; I believe that the opposing combination of broken readymade, sheet glass and digital forms augment one another, and that all processes and materials are equal in status.

1. Quote from All Makers Now, Material and Aesthetics strand text.

A question that arises from your project: Should craft practitioners still predominantly make ‘beautiful physical objects through the skilled use of tools’?