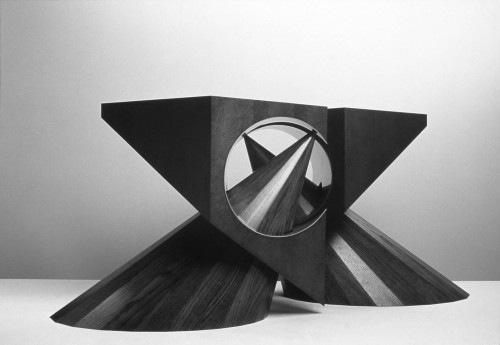 One of my underlying interests has always been a love of geometry, so for years I quietly and intuitively channelled this interest into the making process until I came face to face with my first computer “boffin”. It was in 1979. I was developing a framework in order to design pieces for a classic 1936 Raymond McGrath house without resorting to pastiche. The rules of 30s Modernism stated that wherever possible one should use the latest technology available. So computing was to be included in the framework. I befriended a chap called Paul McManus, an early experimenter with CAD at Teesside Polytechnic and together, using his 3D modeling program VAMP, we made computer sketches for the project. In those days, in order to describe a form, it took all morning to type information into the computer, then that computer took all afternoon to generate an image on the screen.
Subsequently, Paul asked me to be his guinea pig designer running test projects on VAMP and suggesting modifications that might enhance the program’s usability for object makers. We worked together on modelling principles as well as live projects, always ensuring that there was enough information for every facet of every component of the on screen model for it to be made.

My talk will illustrate this body of work which, by 1989, led to the Love Seat, where the computer was used at every stage – design, development and manufacture – of a piece and compare it to how I now use CAD & CAM.

Over the last 25 years the computer has become the dominant tool in practically every endeavour. It has democratised the possession of basic skills in all core fields of occupation. And with that gift comes an apparent confidence and freedom that has generated an entirely new culture. The mouse and the keyboard are the hand tools of the new millennium. For most people using a computer is more hands-on than using a pencil. The tool has changed, but if you’re fluent in the program, many of the processes are the same.

The idea that one must spend ten thousand hours of practice before attaining sufficient proficiency in any craft to be a professional means that computing in itself is a craft skill.
Today, if you can model something on a computer you can make it. But because there is a lot of deep understanding necessary in object making better objects are produced when the person with the idea also has a maker’s head. We still need craft knowledge and haptic skills to make beautiful things and to understand the practicality and philosophy of making so as to avoid the application of craft skills where they are inappropriate. We must be careful not to throw out too much cognitive analogue practice with the bath water in our rush to embrace the cyber world. Remember that for all their scope, computer programs are encodings into the virtual of real experience. The computer is undoubtedly enabling – an enormous great bag of tools for dealing with future and past alike. It re-blurs the boundary between the theoretical and the practical. People who couldn’t spell now can, people who can’t draw now can, and ditto for maths -complex geometry and compound angles are mapped out with ease. The right angle is no longer necessarily the simplest solution to making a box. But keep using that pencil – it’s the shortest route from your brain to an image.