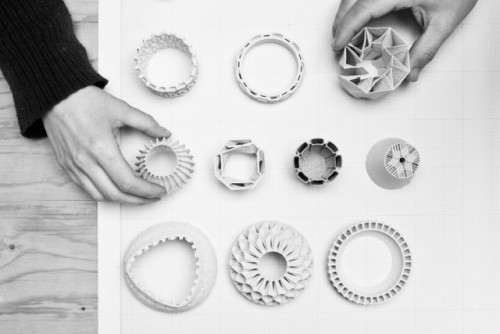 The digital craftsman and his tools

From knife to hammer to 3d printer, the influence of tools on a design is not to be underestimated.

In his essay “Tools,” originally published in 2000 in a book covering the work of LettError, Jan Middendorp argues for the importance of creating your own tools. He refers to the fact that a craftsman, the predecessor of the designer, was never completely satisfied with the tools that were sold in shops. Yet for a long time the instruments of production have been closed systems, discouraging appropriation. This is now changing. Following the personal computer and a range of digital advances, the advent of the personal digital fabricator has lowered the barrier into production and provoked a revival of the idea of “making your own things.”

Unfold started to ‘customize’ their 3D printer into a clay printer. The open source hardware allows them – similar to traditional craftsmen – to create their own tools. By doing so they break away from a predetermined way of designing, dictated by the existing digital tools. As such, they can thoroughly intervene in the production process, and therefore also in the eventual design. Unfold’s 3d printer for ceramics not only harnesses the potential of new technology and materials but also projects the past history of specific techniques into the future. The printer has a great resonance with the way traditional potters handle clay, however because of its ability to produce such fine layers, new form languages are made possible.

With manufacturing going digital, we see a merging of aspects of the pre-industrial craft economy with high tech industrial production methods: a combination that has the potential to shift power from industrial producers and those regulating infrastructure, to the individual designer and the consumer.

A question that arises from your project: Where does the hand stop and where starts the tool?