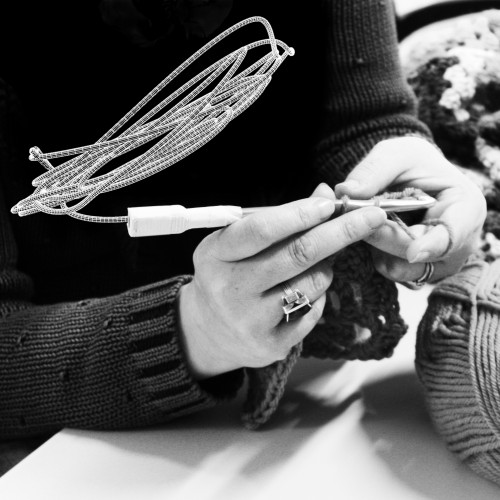 Growing Artefacts out of Making

In this paper I am presenting a speculative exploration into materialisations of digitally captured craft gestures as evocative artefacts. I am discussing initial findings and early experiments of a design-led case study capturing and translating transient movements of crochet practitioners into material traces of the making process.

The skilled process of craft is an active and embodied engagement with materials. As Ingold (2013) stresses, a person’s involvement in the organic making process of an object is essential to creating more meaningful connections. He goes further to state that “I want to think of making […] as a process of growth”(Ingold 2013: p.21), hence focusing on the natural relationship between making and meaning. With this in mind, my research is exploring the relationship between the experience of making, the meaning of material artefacts and digital fabrication as tool for reflection.

Maker culture and craft practice is a growing area of interest in HCI research. As shown by Rosner et al. (2009), digital technology can be used to augment and annotate artefacts in order to elicit reflection on craft practice and encourage communication. Further technological advances in movement capture allow recording of additional facets of the embodied making process, which are often documented via video and pictorial representations only.

In this case study, gestural aspects of the making process were recorded digitally and translated into physical traces as “provocations to thought” (Turkle 2007: p.5) in order to facilitate communication and reflection. Through these digitally fabricated, discursive resources, I aim to highlight the complexity and difficulty in understanding embodied interactions between craft practitioners and their materials. I argue, that by materialising elements of the making process, a richer connection between craft artefact and the embodied process of its making can be created while the value of the artefact itself is enhanced.