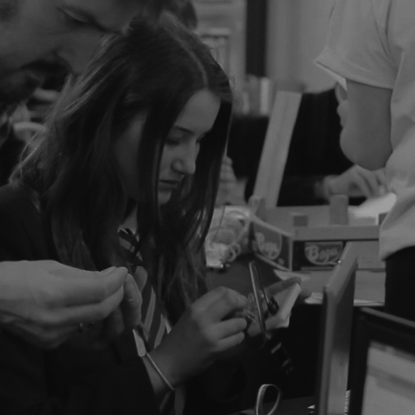 Becoming a Culture of Digi-Makers: Curiosity, Creative Confidence and Imagination at Technology Faires

If technology faires are inspiring and nurturing a culture of digi-makers (Fuad-Luke, A. 2009) this exploratory study asks how is our creative confidence being challenged as we face and engage in becoming a culture of Digi-Makers? Reflecting on the context of the Science, Technology, Engineering and Maths Network (STEMNet) and the first of its kind, iTECH Design Your Future event hosted by the Museum of Science and Industry (MoSI) in Manchester, March 2014, this fast paced and highly interactive event format offers participants an engaging and informal learning environment. Drawing on a collaborative experiment titled ‘The Invention of Things’, two activities were facilitated by The Curiosity Bureau and Shrimping.It. The inventions made by the participants during their involvement with the Imagination Studio have prompted further areas of inquiry into technology faires such as; how is creative confidence (T. Kelley & D. Kelly 2013) encouraged? How can values-led participatory design (Iversena, O. 2012) be applied to the invention of electronic devices? Why does there appear to be a struggle by students curious of technology to imagine and to think beyond the cues of the facilitator

One question that arises from your project: How is our creative confidence being challenged as we face and engage in becoming a culture of Digi-Makers?