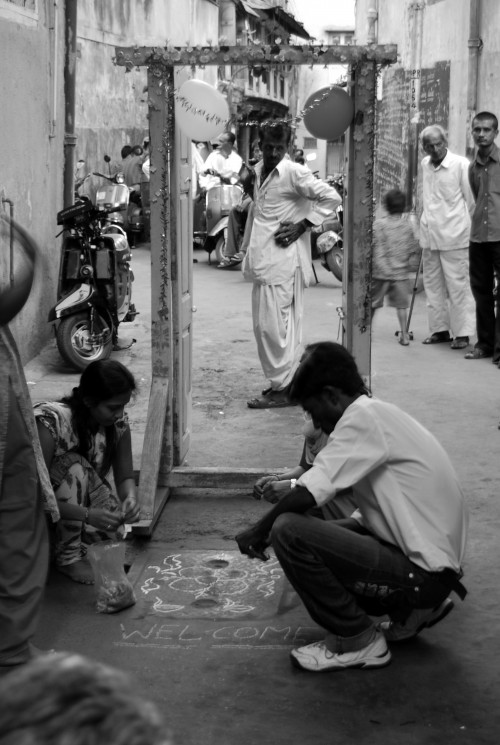 Entry: Digital objects and the (dis)placement of knowledge

New digital technologies and networks offer an unrivalled opportunity to communicate with others. But these same technologies also allow for “the transfer of this knowledge out of the domain in which it is generated.” (Leach 2012). What are the ethical and social implications for craft of this transfer of knowledge, particularly given craft’s long history of bodily intelligence, which traditionally makes it resistant to abstraction and transfer?

This question arises from a project that in transferring knowledge from a ‘real’ domain to a ‘virtual’ one via a digital film and digital platforms, produced two very different responses from the communities involved – those who were filmed and the those involved in filming.

Entry was made during a three and a half week research residency in Dhal ni Pol, one of 600 pols located in the old city of Ahmedabad. It depicts a playful community-focused response to a small doorway decorated with ceramic flowers placed in a public space. In Entry we witness the everyday aesthetics of this part of Ahmedebad’s old city: a mother gently oiling the hair of the child, a group of children spontaneously breaking into a garba, a trademark cycle decorated with garlands.

Once uploaded to digital platforms and sent around the world, the film effectively abstracted knowledge – including everyday craft knowledge – from the relationships in which it was normally embedded. While this represents a good fit with the (Euro-American) idea of knowledge as something whose efficacy increases in direct proportion to its independence from local context, it cuts across alternative understandings of knowledge as something that requires specific conditions to be efficacious (Leach 2012).

As well as raising questions about the abstracting effect of digital technologies on craft as bodily intelligence, the presentation charts the development of ethical considerations, from the outset of the project, to its completion.

A question that arises from your project: Might craft, with its historical foregrounding of bodily intelligence as well as its recent performative turn, be in an ambivalent position with regard to digital technologies, in danger of being diminished as much as built up, if cut free from local intelligence and narratives?